In one of Sweden’s fastest-growing cities, 190 stakeholders have joined forces to produce long-term local planning that ensures sustainable construction. In addition to reduced carbon dioxide emissions, they are also promising pilot projects.

Malmö is one of Sweden’s fastest-growing cities. In order for growth to occur sustainably, a local roadmap for climate-neutral construction has been produced.

So far, 190 stakeholders are affiliated with the roadmap, called LFM30. These affiliates include construction companies, entrepreneurs, consultants and suppliers. They have all pledged to halve their climate impact by 2025 and their activities must be climate positive by 2035.

The City of Malmö is one of seven organisations behind LFM30, but is not offering municipal incentives – the affiliates have joined the roadmap on their own initiative.

– That the industry is driving the climate transformation itself is a great strength. The driving force has to come from every decision-maker in every company, each and everyone, which is why we usually liken LFM30 to a popular movement. I am so proud of all the affiliates, such as the companies which have promised at least one climate-neutral construction project by 2025, as well as halving their overall climate impact, says Josephine Nellerup, one of the initiators and members of LFM30.

A different type of car park 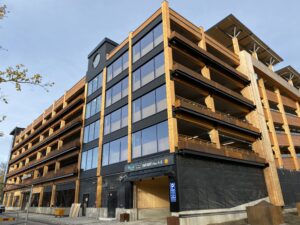 According to Nellerup, of the 50 or so pilot projects that are planned as part of LFM30, some are already underway. One of the best-known is a wooden multistorey car park built on the Sege Park estate in Malmö. The building is constructed from wood and includes 120 charging stations for electric vehicles, with power from solar cells on the roof. It also has rainwater recycling, intelligent solutions for optimising power flows and green façade gardens, as well as a garage for various types of cycles, and space for a vehicle pool, where residents can rent cars, bicycles or cargo bikes.

Nellerup says that she had expected resistance when she initially started sounding out the idea of LFM30.

– But everyone was positive. The strategies have been adopted and are now being driven by the industry. It’s important that the motivating factor for change work comes from within, that’s when you’re honest.

One example of the transparency surrounding the project is that methods for producing a climate budget and climate calculations are published and described on the website, so anyone in the construction industry who wants to see them can do so.

– The biggest challenge in making this type of change in the construction industry is keeping the promises you made to yourself – this is no marketing thing, this is real action, says Nellerup.

Modules that made parking spaces vanish

Several pilot projects within LFM30 have received a great deal of attention from other cities, in Sweden and abroad, that are working towards more sustainable urban environments. Another Swedish project that got extensive international publicity involves a few, relatively simple, wooden modules. 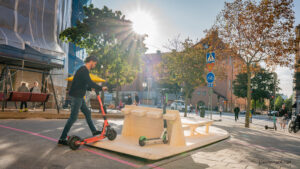 Sweden’s Street Moves innovation programme placed wooden modules on parking spaces in three streets in Stockholm. The modules have specially designed elements that are put on the base plate, with functions that range from charging stations and parking for electric scooters, to outdoor gyms and container gardens. They were a way of testing how to make rapidly changes in how city streets are utilised, magicking away parking spaces and making the area somewhere that can be enjoyed by more residents. Read more about Street Moves here.

The modules had barely been put into place before more Swedish cities registered their interest, and the project had massive media coverage in Sweden and abroad.

ArkDes – the Swedish centre for architecture and design – was responsible for the project. Daniel Byström is a designer and worked as a Project Manager for Street Moves.

– We did something tangible and concrete, which was probably a big reason for the attention we received and why more cities wanted to try it. Not only that, but also how we worked and communicated what we were doing, he says.

Private and public stakeholders cooperated with the project, and people who lived in the city were interviewed for their input.

– For me personally, working with a comprehensive process was important, rather than just taking the first solution and running with it – daring to travel the long road and listening to lots of different ideas. A city is a cluster of many small communities, so it is important to consider different interests and perspectives, Byström says.