Europe is using the New European Bauhaus initiative to accelerate work on creating more sustainable and inclusive living environments. One way of doing this is to build more homes from timber, a method where Sweden is at the forefront.

In the autumn of 2020, the president of the European Commission, Ursula von der Leyen, launched the New European Bauhaus (NEB) initiative. This links EU climate targets with people’s living environments, highlighting the importance of societal, aesthetic and cultural values in the homes of the future.

The Swedish Government has tasked the Swedish National Board of Housing, Building and Planning with coordinating Sweden’s participation in NEB. According to Helena Bjarnegård, national architect at the National Board, new partnerships are taking shape and several Swedish initiatives are underway. For example, Swedish public agencies have invited creative teams to sketch out ideas that support municipalities in the north of Sweden with the creation of beautiful, resilient, fossil-free, innovative and inclusive living environments.

On the question of whether there are working methods, knowledge or products that are unique to the Nordic region, as regards working with sustainable and inclusive urban environments, Helena Bjarnegård says:

– We’re good at building with timber in Sweden. We have come a long way in our climate work, and there’s now great interest in developing circular living environments. We’re also good at being inclusive, working with the use of dialogue and participation, and integrating social aspects in the development of living environments. However, we have a lot to learn from others and we need to raise the bar when it comes to the quality and sustainability of our built environments. New European Bauhaus is an initiative that can support us in this development work.

One of the tallest wooden building in the world

Helena Bjarnegård mentions Sara Culture Centre, a Swedish project that is one of the world’s tallest wooden buildings. It has received a great deal of attention abroad, and has twenty floors with spaces for art, performances, literature and a hotel in the heart of Skellefteå in the north of Sweden. Because the cultural centre is for local residents, work has focused on making it inclusive and inviting, says Robert Schmitz, one of the lead architects from White Arkitekter.

– We have created a building where the content faces out towards the city, while entrances in every direction integrate and connect the building with the street, he says.

The glass façade of the wooden building is thus not only to increase the outward view, but also to increase opportunities for looking into the building and for displaying the timber. 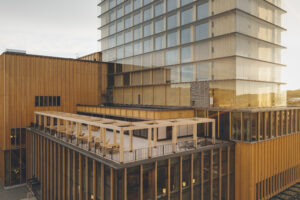 – We want visitors and passers-by to be able to experience the behind-the-scenes work, everything from hanging a new exhibition in Skellefteå art gallery to the creation of colourful stage sets, says Schmitz.

A flexible building that can be reused

The architecture in Sara Culture Centre has grown from the idea that the people who use the building may need to make adjustments. To facilitate this, entire floors can be restructured when necessary, by moving walls that can be folded or collapsed. Despite the building being designed to stand for at least a century, there are inbuilt opportunities for reusing elements of it in the future. Robert Schmitz states that there are generally greater opportunities for reuse and circular thinking when building in wood.

– The technology requires that everything is prefabricated, which also makes it easier to disassemble and reuse. Sweden is world-leading in prefabrication, and digitalisation has allowed us to produce a superb 3D model, where we can categorise 300,000 different elements – so the project is well documented. It will also be possible to replace material in the future, if necessary, without this affecting the rest of the building.

It was the architectural firm’s idea to build the cultural centre entirely in wood.

– They take great pride in their timber construction skills in Skellefteå, so this was one way of reintroducing this in the city. The wood in the building is as visible as possible to produce an effect that generates a sense of belonging. The interior design uses reused or upcycled furniture, which reinforces the idea of the building, that it should be durable. It is important to create spaces that are so wonderful you want to utilise them, says Schmitz.

Timber construction is increasing in Sweden and several Swedish municipalities have adopted strategies for timber buildings, aiming to reduce the climate impact of expanding their housing supply. Timber construction was also the theme of Smart City Sweden’s major event at Expo 2021 in Dubai, in November 2021, which can be viewed on Smart City Sweden’s Youtube Channel.

According to Robert Schmitz, calculations for timber construction projects require a different kind of knowledge, as the process is different to building in concrete. For example, more decisions must be made in the initial stages. At the same time, fewer people are required on-site as everything is manufactured in a factory. Construction is also quicker, as almost a year of production time can be saved.

Robert Schmitz states that one important factor in the success of an innovative project is that there must be an allowance for frank and open discussion, that working in silos is not possible. Elsa Fahlén, who is responsible for the Hoppet innovation programme, agrees.

Hoppet is an investigative innovation programme from the City of Gothenburg that tests different processes and materials to find the optimal solutions for climate-neutral construction. The city’s target is to halve greenhouse gas emissions from new builds and rebuilds by 2025, compared with 2020’s levels, and to achieve close-to-zero emissions by 2030. The programme’s first project is the Hoppet preschool. 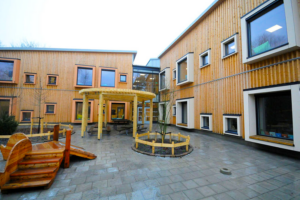 Outside the Hoppet pre-school. Photo: Anders Hall, City of Gothenburg

The aim was to build the preschool as fossil-free as possible, and to have a minimal carbon footprint in everything from the extraction of raw materials and material production to energy consumption in the finished building. The initiative has attracted many enthusiastic actors, with one prerequisite having been to work as a team to achieve shared goals in the project, says Elsa Fahlén.

– The project has attracted highly skilled participants, rewarding partnerships have been initiated and we have been able to take part in several research and development projects. We couldn’t have done this alone, she says.

The next step: increased reuse

The preschool is now finished, and the staff and children moved in at the start of 2022. In a digital tour from Smart City Sweden, you can now visit Hoppet virtually. Take a look inside the Hoppet pre-school here.

According to previous calculations, they have succeeded in reducing greenhouse gas emissions from the foundation and body of the building by 70 per cent, compared to a standard reference school.

One way this was achieved was by building in timber. The wooden joists in the external walls come from the City of Gothenburg’s own forests where, because the city also has biodiversity targets, forestry is done without the use of clear-felling. The building’s foundation is made from cellular glass, which partially consists of recycled glass instead of concrete. They have also experimented with different construction techniques for three smaller buildings at the preschool: a recycling station built from hempcrete, a storehouse in recycled brick, and a third built from local rammed earth.

Research in a range of areas is linked to the project, everything from how to produce fossil-free paints to how to produce pipes using waste material from installations. The biggest challenge has been the availability of fossil-free and climate-neutral products.

– We have examined over 300 construction products. We take a hard line and look at the entire lifecycle, says Fahlén.

The Hoppet preschool, like Sara Kulturhus, is also designed to last a century. The technical specifications also included that the building should be able to be disassembled in the future.

– However, there is so much more to be done, and reuse is our best strategy for climate-neutral construction. We’ve developed processes at the same time as applying them and learned lots along the way. An incredible amount can be achieved just by aiming high on a single construction project, says Fahlén.

Do you want to learn more about timber construction? Listen to Robert Schmitz, Elsa Fahlén and others from the recorded sessions from Smart City Sweden’s event at the Expo 2020 in Dubai. Watch the videos here.