The delegation started in Stockholm, where the group got a presentation about waste management from Smart City Sweden’s Senior Advisor Östen Ekengren, which was followed by a guided visit to the sustainable district Hammarby sjöstad. 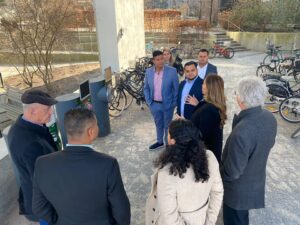 The delegation learning about Envac’s solution in Hammarby sjöstad

One of the solutions presented in Hammarby sjöstad was Envac’s automated waste collection system, where a vacuum is used to transport waste through underground pipes, separating different types of waste into different containers. Read more about Envac’s solution here.

The Mayors also visited Sysav in Malmö; a waste company owned by 14 municipalities that recycle and treat waste from households and industries in Skåne.

The Ambassador of El Salvador, Ms Patricia Godínez, introduced the delegation at the visit to the Waste-to-Energy plant.

– El Salvador needs not only one, but several Waste-to-Energy plants, the Ambassador stated, and gave credit to the politicians in her country for having high ambitions within Waste Management.

At Sysav, Gunilla Carlsson, Public Affairs & International Relations, held a presentation filled with information about the plant with its four boilers, two for heat and two for both heat and electricity. The plant produces in total 1,5 TWh of district heating per year. This equals about 60-70 per cent of the heat needed for the City of Malmö. On top of that, the plant produces 280 GWh of electricity per year.

Sysav’s Waste-to-Energy Plant is one of the world’s most advanced plants for incineration of waste, and thanks to its model flue gas cleaning system Sysav stays well below the emission permits. The largest part of the plant consists of different steps for cleaning the flue gas.

– We have no problems with emissions except for carbon dioxide, Gunilla Carlsson reassured the mayors.

In the afternoon, the delegation met with representatives from the City of Malmö for discussions regarding cross-border collaborations. The meeting was organised by Smart City Sweden South.